Home » Blog » Buritisshu or Igirisu? How to make your fashion brand more visible in the Japanese market?

Buritisshu or Igirisu? How to make your fashion brand more visible in the Japanese market?

Japanese consumers have a reputation for embracing new technology, contemporary design and also heritage products, but how do they view British fashion goods? How important or not is Britishness? And what are the e-commerce opportunities for British fashion brands?

Japan is ranked 4th most productive country, (according to the International Monetary Fund, Oct 2017), and its e-commerce consumers are expected to grow to 88.92 million by 2021, with an estimated average spend of 1,257.37 USD online.

Fashion is expected to become the most purchased online category by 2021, according to eshopworld,  accounting for almost a third of this spend, with an estimated value of 32.23 billion USD.  It will overtake Electronics & Media and present significant opportunities for cross-border brands.

Japan is one of two markets which stand out in this breakdown, alongside Germany. Japan favours ‘イギリス’ (“Igirisu” rather than ブリティッシュ – “Buritisshu”) and Germans are more likely to refer to ‘Englisch’ (rather than ‘Britisch’) brands.

To understand why the Japanese are more likely to use the equivalent term for English over British, we asked Oban’s unique LIME (Local In-Market Experts) network in Japan. Masaharu suggests historical usage.

“イギリス (Igirisu) is the oldest word, so it’s the most common term used. Igirisu – means “English” and comes via the Portuguese word Inglês. It is usually used by Japanese people to mean the UK as a whole.”

Momoko offers, “We refer to England over Britain in history and geography. That stems from our school education. Hence media, products and communications in general use England more commonly than Britain.” However, she goes on to say, “Japanese people may be more familiar with the sound of the word ‘English’ than ‘British’, but that doesn’t mean they are genuinely thinking of English rather than British. Most people know the difference between Britain and England, but many may not be able to tell the difference between English and British brands.”

Compared with Germany, where customers are using the word Englisch in online searches for some fashion verticals, current online search volumes for British versus English fashion in Japan do not reflect the responses from our Japanese consumer sample. For example, there were 4,600 searches for “British fashion” compared to just 10 for “English fashion”, a pattern reflected in searches for dresses and suits. The rise in voice search may change this, and it will be worth tracking the more commonly used word Igirisu.

When we asked our consumer sample to identify British fashion brands from a provided list from around the world, Burberry was universally recognised as British by respondents across all ten markets including Japan. Perhaps this recognition is unsurprising considering their marketing heavily emphasises their British heritage, which appears to be paying off.  Around three-quarters of Japanese respondents knew that Burberry was British, but they scored very poorly on identifying other British brands compared with the other markets researched. This may reflect the marketing investment by other British brands in Japan, combined with their decision not to focus on Britishness as part of their marketing communications.

We then asked respondents in each country to rate how desirable fashion brands were from various international markets.

“France and Italy are simply better at branding, from fashion to food, to movies to the destination in general. It does not necessarily mean British brands are not stylish, or bad.” This was the response from our LIME, Momoko to our findings on how Japanese consumers ranked different country’s fashion products for desirability.

The Japanese were second only to the French in the numbers rating their local fashion products most highly. One further visibility challenge for British brands is the thriving Japanese fashion industry with the likes of Uniqlo, Issy Miyake, Evisu and Undercover.

We also asked our sample what prevents them from buying fashion goods from the UK? Japan was unique among the countries outside the UK in ranking sizing differences as their most important concern. For our other markets shipping cost was by far the biggest issue. Shipping cost and returns policies are concerns for Japanese consumers but not as much as sizing concerns. On a positive note, Japanese rate British fashion for high quality and the majority say it provides good value for money. Only 3 % cited quality concerns, significantly less than our other markets. 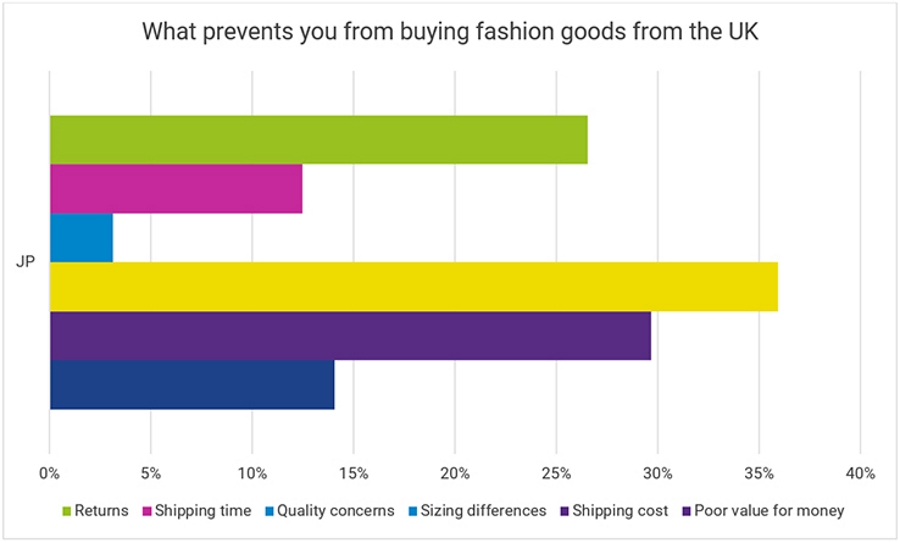